This amazing Georgian food comes in several varieties but the most popular is a round, pizza-like flatbread filled with melted cheese. Anyone on a diet may leave now. ​

The most basic variety is Imeruli Khachapuri - a simple flat bread filled with cheese. The most jaw-dropping is the Adjaruli Khachapuri, where the bread is formed into a gondola shape filled with melted cheese and with a raw egg cracked open on top. The egg is cooked by the molten cheese. It looks spectacular but is probably best left as an experience to savour on a visit to Georgia. The variety I like to make is called Megruli Khachapuri. It is similar to Imeruli but with extra grated cheese on top. Some people may refer to it as “Georgian pizza” but I think it would be equally legitimate to refer to pizza as “Italian khachapuri”. In fact, with khachapuri, as with pizza, there are no rules and regulations - if you are making it you can do what you like; if you fancy plonking olives and pepperoni on your khachapuri then that’s up to you, it’s just that it won’t be authentic. The Georgians don’t mess with it, probably because it doesn’t need messing with. ​

(In Georgia, khachapuri is usually made with sulguni cheese, which isn’t readily available in the UK. The mixture of a salty, crumbly cheese such as Cheshire or Wensleydale, with the stringiness of mozzarella is a decent substitute. Most people are more likely to have something like Cheddar or Red Leicester in the fridge, and these work fine too but you might want to add a pinch of sea salt to the cheese mix. This is entirely optional and to taste of course, but when you first try khachapuri in Georgia it might strike you as being overly salty, which is purely down to the cheese used. If you get into the habit of adding salt to your own khachapuri it might better prepare you for the 'real' thing! Some recipes add an egg to the cheese but that is also entirely optional and not really necessary.)

Put the yogurt in a jug or small bowl and add the bicarbonate of soda. You really don't need much, probably even less than the 1/4 teaspoon mentioned in the ingredients. Stir it and leave it for a minute and it should quickly turn into foam. Add the water and oil, stir again and leave it for another minute. Put the flour into a large mixing bowl. Form a deep well in the middle and pour in the foamy yogurt mixture. Then mix the ingredients with a wooden spoon until you have a lump of dough you can turn out on to a work surface.

Knead the dough for about a minute. You don't want to overwork it. You are not making bread here so the knead and prove process is not critical. A brief knead is all you need! The dough will then be pliable enough to stretch and work.

Once you can form your dough into a smooth ball, roughly flatten it out into a thin circular shape. Mix the two grated cheeses together and add about two thirds of it to the centre of your dough. Fold in the edges of the dough until they meet in the middle, where you can pinch them together. Try not to gather too much dough together in one spot. You want the dough to be as even in thickness as possible, but you need to take care not to allow any splits or gaps where the cheese can escape! There can be a lot of trial and error in this. Don't be scared of it though–it is only bread and cheese, it won't bite! Next, begin to roll it out into a thin, pizza-like shape. You need to be a bit brave here. You want to get it as thin as you can without the dough tearing and letting the cheese out. Maybe play it a bit safe the first time and get bolder as you become more expert. If you do get any holes or cracks, try to pinch them closed. Give a light dusting of flour, then turn over and give it a final roll if you want.

Just like pizzas or naan breads, khachapuri really needs the right kind of oven and unfortunately it isn’t the kind most people have in their kitchen. If you happen to have a pizza oven, great, use that. Otherwise I recommend pan frying (though it isn't frying as such) over a normal oven. A heavy stone-ceramic pan is good. A cast iron skillet or similar is even better. Place your khachapuri in/on it and add the remaining cheese on top. Don’t use any oil by the way. Bake it on your hob, medium heat, for around three minutes. You can lift it carefully with a spatula to check it is browning but not burned. Then take the frying pan and place it under a preheated grill, again for two or three minutes until the cheese is bubbling and browning. If the whole thing begins to puff up you can prick it with a knife to allow the air to escape.

Turn it out on to a plate and then stare longingly at it, wondering just how long you need to wait before that cheese is cool enough to eat. That is something you need to work out for yourself. Enjoy! 😊

Other notes: If you want to make the Imeruli version, the process is the same except don't put cheese on top! This means you don't need to put it under a grill but can instead flip your khachapuri over like a pancake. When you put an Imeruli khachapuri out onto a plate, you can rub a knob of butter over the top of it to help keep it soft. Georgians do this but if, like me, you are not averse to a bit of crunchy bread, then you can safely omit this step and save a few calories into the bargain. If you think the khachapuri is a bit plain or boring then feel free to experiment. Recipes are not law. You can spice up the cheese with chilli flakes or caramelised onion, for example. If you are a fan of garlic bread you could add some garlic powder (or very finely chopped garlic) to the cheese. Or try different cheeses. Blue cheese or goat's cheese, feta, for example. As a rule, you generally need some mozzarella in there for the stringy texture it provides but you could use just about any other cheese with it. I've even tried it with a popular cheese spread and it was surprisingly good. And whilst we're on the subject of cheese, a common rookie error with khachapuri is to not to put enough cheese in it. The pile of cheese you put on the dough should look like there is no way you can fit it in and stretch the dough over it. If you don't have a bit of a struggle to contain the cheese then you're not using enough cheese and you'll just end up with a flatbread with a slightly cheesy taste. Khachapuri should be a cheese MONSTER. ​ 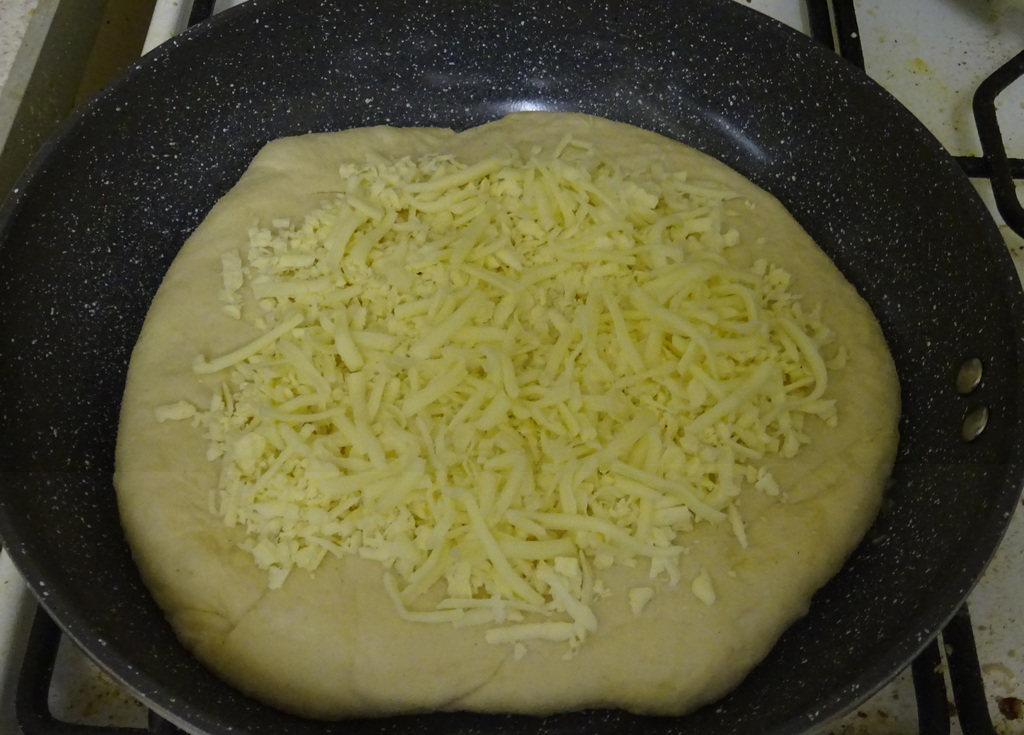 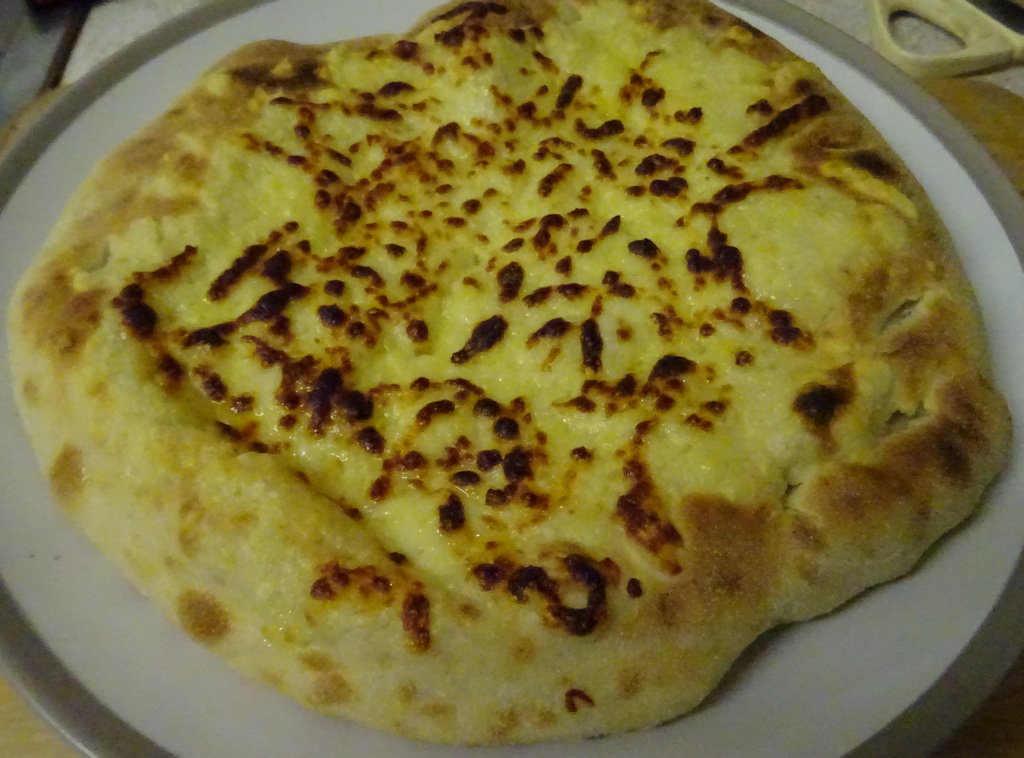